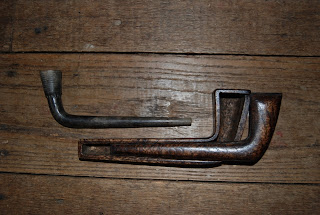 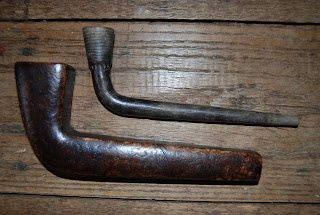 Burl Pipe Box
Several years ago I acquired this historic pipe from a fellow that claimed to have found it while doing foundation repair to his home in Otsego County in New York State. It is a very fine example of an original 17th century, Iroquois (Oneida?) clay pipe. The pipe, (16.5 cm long), is hand formed, highly burnished, and pit fired. I have seen very few examples of these classic pipes outside of a museum case. The rarity and fragile nature of the pipe inspired me to create a protective case.

It was a long Winter here in the Midwest and making a neat little burl pipe box was the perfect project to wait out the remaining chill of the season. I can't create such a thing in a time clock sort of way but instead, I keep it along side my other projects and work an hour or two on it at a time. The goal is to make the box just large enough for the pipe to easily be removed, but not so large as to allow the pipe to rattle if shaken. The lid required the most effort, it needed to slide easily but still retain enough friction in the grove to hold itself closed. stable ash burl is the perfect material for such a project. It took perhaps 500 or more times to test the lid, remove it, scrape a little here and there and test the fit again. When you make such a thing, forget about time, it's irrelevant. I hope it still fits well when Summer humidity sets in!

Posted by Steven Lalioff at 9:54 AM