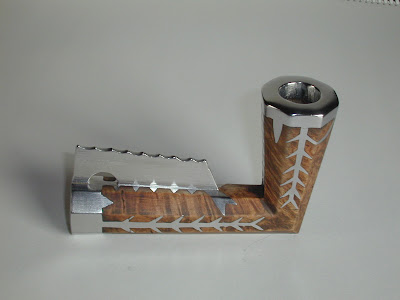 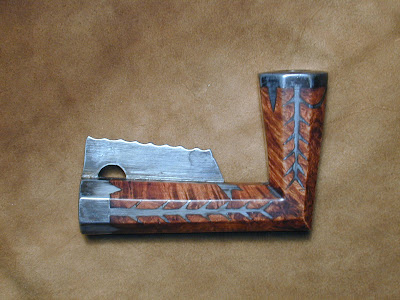 It was this pipe what got me started on carving burl. About 12 years ago I was leafing through the Magazine Antiques and I saw an ad for the original pipe. It was made by Woodland Indians in the late 18th or early 19th century and I thought it the coolest Indian artifact I had ever seen. I called the dealer to ask about it's history and learned the pipe was still available...I can't remember the exact price but it was princely sum and well beyond my reach. I thought, hum, for that amount I think I can make a copy and have tens of thousands of dollars left over to make a stem to go with it.

Finding the burl was the first order of business in making the copy. Luckily, I found sugar maple burl on the Internet. Once it arrived I set to work and didn't come up for air for many hours. I wanted to make it in as authentic a manor as possible, using only hand tools. One thing I always do is begin with scale drawings...perhaps not the way the original maker would have done. It was Winter time and I spent many evenings scraping and carving the recesses for the lead inlay. When I was young I worked for a living history museum and part of my job had me casting pewter spoons. I became rather good at fussing with the heat and flow of the soft metal so I had this prior knowledge to help me in casting the leaded pewter into the carving. In about 2 weeks of evening work I had my pipe and I thought it every bit as good as the original...as far as I was concerned, it was better, I was a fortune ahead and I didn't need to keep mine in the safe.

While pondering the decoration of the pipe I wondered what significance the design elements might have. It was suggested to me that the barbed designs might represent corn or even turkey tracks. The crest of the fin might be a representation of water and the half circular piercing the sun or moon. Was all of this to tell a story, were these mnemonic devices? I am inclined to believe so. I don't believe Native American artists of the past were prone to, l'art pour l'art.

The photos are of the pipe as it would have looked new and as it appears now with patina applied.

I have yet to find time to make the stem!
Posted by Steven Lalioff at 5:04 PM No comments: