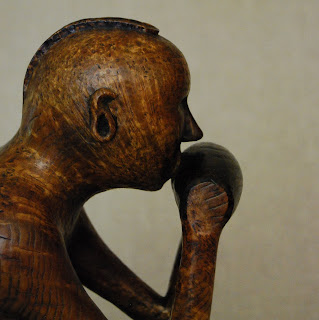 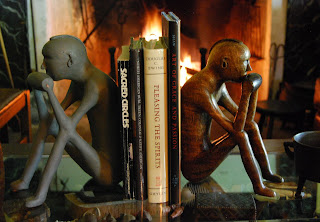 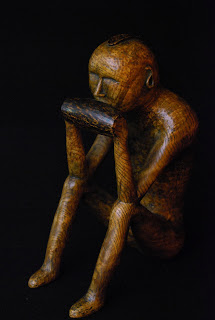 
"Fathers,---He is almost choked with grief. He asks for a little of his father's milk, to clear his throat." Quote by an elderly Chief on behalf of a young man.*
General proceeding under the Treaty of Fond du Lac, August 2nd, 1826. Sketches of a Tour to the Lakes, of the Character and Customs of the Chippeway Indians, and the Incidents Connected with the Treaty of Fond du Lac. pp. 468, Thomas Loraine McKenney, Pub. 1827

What an odd and interesting coin of phrase,"Father's Milk". This early phrase was oft spoken by Woodland Indians in reference to alcohol. Unknown to most Native American tribes until the arrival of Europeans, alcohol had a profound and devastating effect upon Indian culture.

My inspiration for this sculpture came by several known historic Native American effigy smoking pipes. Tobacco and alcohol were both considered sacred vehicles used to transcend one from this plane to a more spiritual plane of understanding. The sculpture sits naked and unadorned, a dark metaphor for alcohol.

Creating this sculpture was painstaking. I wanted to preserve the primitive posture of the effigy and work within the size limits of the burl wood available. Burls do not come in neat, square pieces, they are organic and oblique, requiring much contemplation as to how a form is to be extracted. My work always begins with sketches, the first of which are little more than cartoons but gradually, as the design is refined in my head so are my drawings. Realizing the complexity of this design, I created a clay maquette as a carving aid. It was my hope the clay model (see photo 2 above) would speed my work. It was helpful but still I was more than 5 weeks at carving. Quality burl is so rare and dear in cost I cannot afford to make a mistake. The time it takes to remove the last 5% of material is many times the effort it takes to remove the first 95%. The closer you get to completion, the more concentration is required.

The barrel and hair of this sculpture I darkened by scorching the wood with a hot iron, a traditional decorative technique applied by Native artists in the period. The earlobes of the effigy are slit and elongated as was the custom of Indian men in the early period. I'm currently carving an accompanying sculpture to Father's Milk. I intend to cast a limited number of the pair in bronze as bookends.

It's been a productive Winter and Spring for me. I found the inspiration to see to the creation of a new bronze, (appearing on this blog soon) and 3 major sculptures in burl; Supplication, Shaman's Wand and now Father's Milk.

* Thanks go to Scott Meachum for locating this reference and suggesting the perfect title.
Posted by Steven Lalioff at 11:25 PM